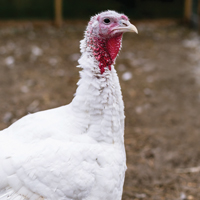 White Holland Turkeys have wide breasts, short legs, and were originally an important commercial bird in the U.S. in the early 20th century. Today the White Holland Turkey is considered a Heritage breed and is very rare — listed as threatened by the Livestock Conservancy — and mostly kept by exhibition breeders.

To Use Free Shipping: